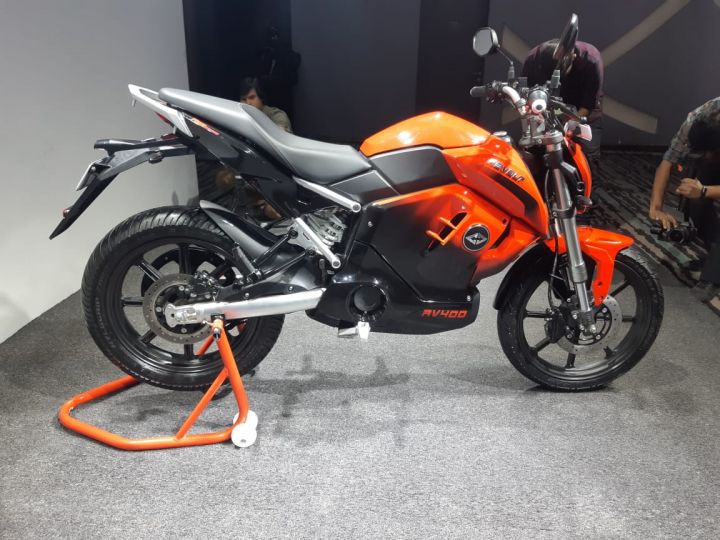 Revolt Intellicorp, an electric vehicle start-up headquartered in Gurugram, has unveiled its first fully electric motorcycle in India, the RV 400. The company hasn’t revealed the price yet, but its expected on-road price is around Rs 1 lakh.

One can pre-book the motorcycle through the company’s website for a token amount of Rs 1,000 starting June 25. Revolt Motors is founded by Rahul Sharma, former co-founder of Micromax Informatics. The Revolt RV400 is an entry-level commuter electric motorcycle which will have several unique features, and will be the first electric motorcycle with artificial intelligence, synthesised sounds and a swappable battery location network.

In terms of features, the Revolt RV 400 is ahead of its rivals by a considerable margin. Along with LED headlamps and a fully digital instrument cluster, it features AI-based technology which improves the battery performance as per the riding style. The ‘artificial intelligence’ system will also calculate real-time battery consumption, range, distance travelled, time taken, and more. It gets Bluetooth connectivity and buyers can remotely start their motorcycles via their smartphone! The bike will also support voice commands to start the motor. Also, to make sure the RV 400 pleases die-hard fans of petrol-powered motorcycles, Revolt has equipped it with an option of four artificial exhaust notes. Whether the electric motorcycle will get additional exhaust notes in the future via OTA updates remains to be seen.

Why we think that Revolt RV400 is special e-vehicle:

The bike also having three power modes and the ability to change the sound of the exhaust note.